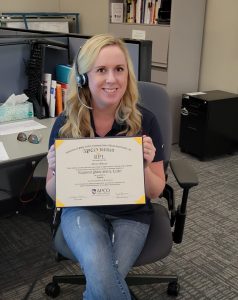 This program, offered by the Association of Public Safety Communications Officials (APCO), is designed to provide leadership, management and communications skills Public Safety Telecommunicators need to be successful leaders in Public Safety Answering Point (PSAP) operations.  The program takes place over the course of a year, through virtual classroom training, meetings, and service projects, with successful completion culminating with the individual earning the RPL designation.

Congratulations to our own Grace Shuey, RPL!

More information on this program can be found on APCO’s website at APCO International (apcointl.org)

In May 2013, the Washington State Chapter of APCO announced that KITTCOM AIX UNIX Specialist Alex Bulat was the recipient of the Chapter’s Technician of the Year Award for his outstanding performce and support while maintaining the UNIX server and the records management system used by KITTCOM.

KITTCOM’s staff and administration nominted Darlene for her knowledge and skills as a supervisor; her ability to build effective teams and her strong support of her co-workers as well as KITTCOM’s administration.  Darlene was also the main force behind an extensive re-write of the Center’s procedure manual.  For her outstanding work, Darlene was honored at APCO International’s annual conference in Boston in August 2000.

“Thank You!” luncheons at the Prospector Inn at Suncadia for Telecommunicator Week in April.

In April 2001, the Washington State Chapter of APCO announced that KITTCOM Communications Engineer Bob Johnson was the recipient of the Chapter’s Technician of the Year Award for his outstanding performance engineering and supporting the area’s extensive public safety communications infrastructure. Then, later the same month, APCO International announced that Bob had also won the international award!

Bob was honored at the Washington State APCO Chapter’s annual conference in July 2001 and again at the APCO International conference in Salt Lake City in August 2001. Way to go, Bob!

Photos from the surprise lunch reception for Engineer Bob Johnson when he learned he’d received the APCO 2001 International Technician of the Year award!

KITTCOM Administrative Board Meetings will be held the second Thursday of each month at 1:30 PM